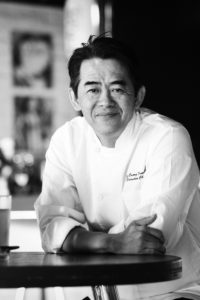 Peter Cuong Franklin is a Vietnamese-American Yale graduate who decided to pursue his passion in the culinary arts after a successful career in investment banking.

After attaining the Grand Diplôme de Cuisine & Patisserie from Le Cordon Bleu, Chef Peter trained at some of the best restaurants in Hong Kong (Caprice at Four Seasons Hotel), Chicago (Alinea & Next), Bangkok (Nahm) and Vietnam (La Vertical & Madame Hien). This multicultural and international background is reflected in his cooking style, which is contemporary yet firmly grounded in tradition. Peter has also received a Master’s degree in gastronomy from the University of Adelaide’s School of History and Politics.

A pioneer of modern Vietnamese and Asian cuisine, Peter aspires to renew the relevance of culinary traditions in an ever-changing global food scene. He has travelled extensively in Asia, learning local recipes and techniques from traditional food shops and street vendors. The true inspiration for cooking, however, comes from his mother, who runs a small noodle shop in Central Vietnam and was famed for her regional-style pork and turmeric noodle soup and pork sausage steamed in banana leaves. By focusing on vibrant Southeast Asian flavors and market-fresh ingredients — and using his French culinary skills to combine them — Peter connects traditional cuisine with modern presentation and techniques.

In addition to his role as a chef based in Hong Kong and Vietnam, Chef Peter is also a restaurant consultant, cuisine and pastry cooking instructor, and frequent contributor at conferences on food and culture. Peter also serves on the chef advisory board of STREETS International, a charity based in Hoi An, Vietnam training disadvantaged youths for a career and future in F&B. Peter and his restaurants have been recognized with multiple awards and citations, including: CNN International for Hong Kong’s Best New Restaurants (2016), Foodie Forks Award for Best Casual Restaurant (2016) and Chef of the Year (2014), beating out some of the city’s best restaurants in the contest for Best Fried Chicken in Hong Kong (2016), and named by Wine & Dine Magazine SG as one of Southeast Asia Visionaries (2018), Vietcetera Grand Jury Award for Best Restaurant (2018). Peter is the chef and founder of ANAN Saigon and NHAU NHAU Bar.

The name of the restaurant is ănăn, which means ‘eat eat’. It is located in Chợ Cũ along Tôn Thất Đạm Street, a wet market right in the center of bustling Saigon. We specialize in street food-inspired dishes created by the award-winning chef Peter Cuong Franklin. Chef Peter’s creative new Vietnamese cuisine reflects his vision of a Vietnam that is deeply respectful of its history and traditions yet progressive and international in its outlook. He takes inspiration from the country’s vibrant food culture and uses fresh ingredients often sourced from local markets while incorporating French culinary techniques. The result is a focused menu of deeply flavorsome dishes.