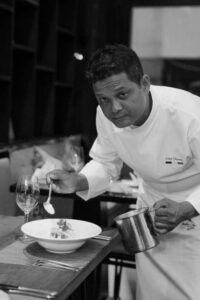 Sakal Phoeung is a French Executive Chef with over 25 years of experience in luxury hotels and several upscale restaurants. After serving as Executive Chef for the opening of Sofitel Phnom Penh Phokeethra, he came back to Vietnam in 2012 as the Executive Chef of Sofitel Plaza Saigon until 2016. His cuisine reflects a unique blend of creative flair and passion for food while his interpersonal skills make him one of the most beloved chef in Ho Chi Minh City. His enthusiasm, his generosity, his strong work ethics have helped him build a strong culinary team who is striving for perfection and nothing less. Now owner and chef in his own restaurants (Le Corto & P’ti Saigon), Sakal keeps on sharing his knowledge and passion consulting on culinary projects. During his career, Sakal has cooked for several state visits with the latest one being a dinner at his own restaurant for French President François Hollande.

As President of les Disciples d’Escoffier Vietnam, his simplicity has brought together members and inspire other chefs and epicureans to join the organization. His dynamism and will have strengthen the relationships between members but also have given them all a new energy to come up with new gathering and sharing events.